The aim of this study was to determine whether local fishes might control common carp recruitment in the Malheur National Wildlife Refuge by preying on carp eggs. To test this possibility we established twenty-eight 1.8 m x1.8 m mesh (3 mm mesh size) enclosures in shallow waters within the refuge. Four of these enclosures were kept fishless and used as controls, while the other 24 were stocked with one of six species of fish that were captured within the refuge: tui chub (Gila bicolor), redside shiner (Richardsonius balteatus), speckled dace (Rhinichthys osculus), pumpkinseed sunfish (Lepomis gibbosus), redband rainbow trout (Oncorhynchus mykiss), or black bullhead (Ameiurus melas), to achieve four replicates per species. Fish biomass in each enclosure was 65g ± 5g with individual fish size ranging in length between 65 and 125 mm. In each of the control (fishless) enclosure we placed a small (~ 1L) fine-mesh bag (0.5 mm mesh size) that was used as a control for invertebrate predation. Each enclosure was stocked with 300 carp eggs attached to artificial vegetation (yarn). Egg predation was quantified over the first 24 h and the experiment was repeated three times during two consecutive years (2012 and 2013). We used ANOVA to analyze the results and Tukey HSD to test for differences among treatments (P = 0.05). Predation on carp eggs was highest in enclosures stocked with speckled dace and black bullheads in which 60% to 80% of eggs disappeared within the first 24 h, a rate significantly higher than that of the controls (Fig. 1). Disappearance rates of carp eggs in enclosures stocked with other species (tui chub, redside shiner, rainbow trout and pumpkinseed sunfish) were not statistically different from the controls suggesting that these species do not forage extensively on carp eggs. However, while predation on carp eggs by tui chub was low (<35%) during the two runs of the experiment when water temperatures were relatively low ~ 15°C, it increased dramatically (80%) during the third run of the experiment when water temperature exceeded 20°C. Because carp spawn when water temperature exceeds 20°C, tui chub, which are the most abundant native fish within the refuge, may play a role in controlling the survival of carp eggs. There was no statistical difference between the fishless controls and the fine-mesh controls (Figure 2) suggesting that invertebrates did not prey extensively on carp eggs. Our results suggest that at least two species of local fish forage on carp eggs and might play a role in controlling carp recruitment. Further experiments are now needed to test whether local fish also prey on carp larvae and juveniles to test if fish-based biocontrol scheme might have potential as it does in the Midwest. 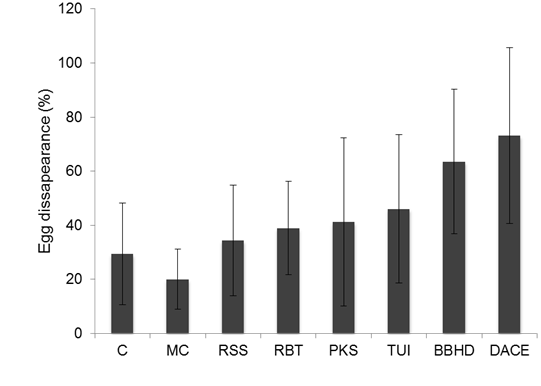