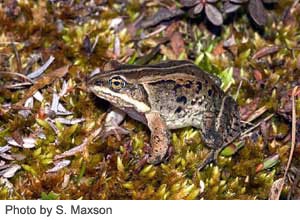 Distribution, abundance, and habitat relationships of anurans that inhabit subarctic regions are poorly understood, and anuran monitoring protocols developed for temperate regions may not be applicable across large roadless areas of northern landscapes.  In addition, arctic and subarctic regions of North America are areas predicted to experience changes in climate and, in some areas, recently have experienced habitat alteration due to high rates of herbivory by breeding and migrating waterfowl.  In 2004 and 2005 to better understand subarctic anuran abundance, distribution, and habitat associations, we conducted anuran calling surveys in the Cape Churchill region of Wapusk National Park, Manitoba.  We conducted surveys along ~1-km transects distributed across 3 landscape types (coastal tundra, interior sedge meadow/ tundra, and boreal forest/ tundra interface) and estimated the probability of detection and density of boreal chorus frogs (Pseudacris maculata) and wood frogs (Rana sylvatica).  We detected both wood frogs and boreal chorus frogs on 22 (87%) of 26 transects surveyed, and probability of detection varied between years and species and among landscape types.  Estimated density of both species increased from the coastal zone inland toward the boreal forest edge.  Our results suggest that anurans occur across a wide range of habitats in this subarctic tundra landscape, that there are spatial patterns in anuran abundance, and that considerations for both spatial and temporal variation need to be incorporated into surveys for subarctic anurans.