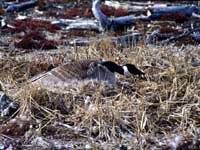 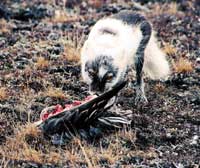 We analyzed 2 separate time periods, 1993 – 2004 and 1998 – 2004, because fox removal occurred on our study area from 1994 – 1997.  We developed models a priori and we ranked them using Akaike’s Information Criterion corrected for small sample sizes (AICc).  Our results were not consistent with predictions of the bird-lemming hypothesis, but suggested that both arctic fox trapping and nest discovery influenced predator-prey dynamics and subsequently nest success.  Our results also suggest that predators may respond more quickly and across a broader spatial scale to declines in primary prey (e.g., lemmings) than previously considered under the bird-lemming hypothesis.