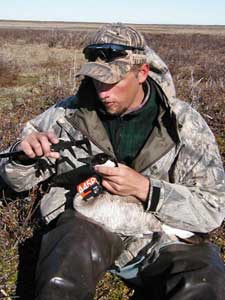 Extensive data on both snow geese (La Pérouse Bay and the Hudson Bay Project) and Canada geese exist for the last 25 years, and the close proximity of study sites at La Pérouse Bay and Cape Churchill make it possible to more closely investigate the interaction between breeding snow geese and Canada geese at Cape Churchill than at any other site. To better understand the potential influence of snow geese on Canada geese during the breeding season we initiated a radio telemetry study in 1999. Our objectives were to: